How to get eVisa for Angola We will send you your approved document in a couple of days - without you having to go anywhere! Show your passport and the visa we sent you when you arrive at your destination.

In order to process the Angola tourism eVisa, you must prepare the following documents:

If any of these elements are missing, your application will be saved so that you can complete it at a later stage.

The entire process of obtaining an electronic visa for Angola can be completed online, so you do not need to travel. Once you arrive in Angola, you will have to exchange the document we will send you for the final visa. You will then make a final payment to the authorities in the country.

The application for the Angola e-Visa at Visagov has been simplified to assist with the reduction of errors and omissions. It will only take about 5 minutes to complete.

You will need to print the approved document that arrives via email, and present it together with your personal documentation upon arrival in Angola.

Do you need more information? See our complete guide: How to get a visa for Angola 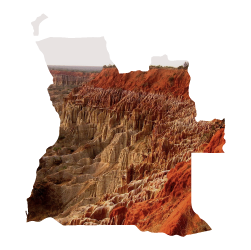 I totally recommend it, effective service and they are very friendly. Thanks again!
Ana
4.0
Very efficient and decisive online service and attention, I got my official visa in just a few hours.
Albert
5.0
They know what they are doing, fast and efficient. 100% recommended.
José
5.0
Fast and easy visa processing. Recommended
Carlos
5.0

How long does it take to get a visa for Angola?

Submitting your application will take no more than 5 minutes once you have all the required documents.

What do I need to do to go to Angola?

To go to Angola you need to have a valid visa, and an ordinary passport with a validity of more than 6 months starting from your arrival date.

Do I need to be vaccinated to travel to Angola?

You need to be vaccinated against yellow fever in order to enter Angola. People who do not present a yellow fever vaccination certificate will be refused entry to the country.

Is it possible to work with a tourist visa in Angola?

No, to work in Angola, you need to go to your country's embassy and apply for a work visa.

What do I have to present when I arrive in Angola?

You must have your approved visa, your ordinary passport with a validity of more than 6 months starting from your arrival date and your updated yellow fever vaccination certificate.

Do I need an e-Visa for Angola?

In most cases yes, even if some nationalities are excluded. You can consult our eligibility checker to see if you need a visa for Angola.

When is the best time to apply for my visa for Angola?

We recommend you to complete your visa application at least 15 days before your trip.

Which countries need a visa for Angola?

All travelers must have a valid visa, except Angolan citizens, citizens of Namibia and Cape Verde, citizens of Brazil and South Africa, as long as they carry an official or diplomatic passport. Citizens of Cuba, Portugal, Russia and São Tomé and Príncipe do not need a visa either, as long as they carry a diplomatic or service passport, and foreigners residing in Angola who carry a return permit.
You can use our eligibility checker to see if you need a visa to visit Angola.

All foreign national travellers must apply for a visa to travel to Angola, regardless of the reason for their journey. The only nationality exempted from applying for a visa is Portuguese when travelling for tourism or visiting a family member.

To visit Angola, you must apply for a tourist visa online. For eligible nationalities, the Angola eVisa is valid for 60 days and allows a maximum stay of 30 days in the country. The Angola tourist eVisa allows multiple entries during this period. Note that it is not possible to live or work in the country with this visa.

Each traveller will be assessed individually upon arrival in Angola. Note that having an approved visa does not guarantee access to Angola. If you have falsified or omitted information relevant to your stay in the country, government authorities may deny entry.

We use cookies to ensure you get the best experience on our website. If you continue browsing, you accept our cookies.Learn more