What's the best time of year to travel to Nepal?

Nepal is a small landlocked country set in the midst of the Himalayas that borders with India and Tibet.

Its magnificent snowy peaks, shimmering temples and warm locals will captivate any traveler. If you’re looking for adventure and adrenaline mixed with spirituality and culture, a trip to Nepal is for you.

The general climate in Nepal is moderate, with some months of hot and humid weather. The temperature will also depend on the altitude you are at, so read this article on the climate in Nepal to fully prepare your trip to this fascinating country.

There is no wrong season to visit Nepal, you just have to plan your trip carefully according to each season.

Nepal is on a subtropical latitude and due to its mountainous terrain it has varying temperatures. The yearly monsoon season brings hot temperatures and humidity, and due to the altitude of the Himalayas the temperatures can sometimes drop to below freezing.

Most visitors travel to Nepal in spring or autumn, which are great seasons to enjoy mountaineering and other outdoor activities. Nepal can still be a good destination in winter but bear in mind that many mountain trails could face icy and snowy conditions.

When is the best time to visit Nepal?

During the autumn, in the months of October and November, Nepal will fill up with travelers, as the weather is ideal for trekking and other outdoor pursuits. Bear in mind that mountain trails around the Annapurna Mountain Range and Mount Everest may become busier during the high season. It is also a good idea to book any accommodation and travel in advance.

During March and April, the weather is quite warm and nature is blossoming in Nepal. It's a great time to visit Bardia or Chitwan National Parks. In these parks there are around 68 species of mammals, and you can see animals such as tigers, rhinos and crocodiles.

June, July and August are the hottest months of the year in Nepal, with temperatures ranging from 29℃ to 17℃ depending on the area of the country. Monsoon season starts around the middle of June and ends mid-September, although it varies slightly depending on the year. Monsoon brings humid and muddy conditions, as the country gets around 80 percent of its annual rainfall during this time. There are fewer tourists during this period, but the advantage is that prices will also be lower.

During the Nepalese summer you can organize more cultural or spiritual quest activities such as day trips to visit the UNESCO world heritage sites near Kathmandu and Pokhara or visiting temples if trekking is difficult because of the weather.

From December to February, the winter in Nepal, temperatures can drop substantially and there will be increased snowfall. However, you can get very clear skies and good visibility which could be a good time to book a mountain flight to truly experience the clear beauty of the Himalayan peaks in the snow.

Nepal holds a special status for both Hindus and Buddhists, so you can expect many of the local festivities to be of a religious nature. Here are some of the best events throughout the year you shouldn't miss. 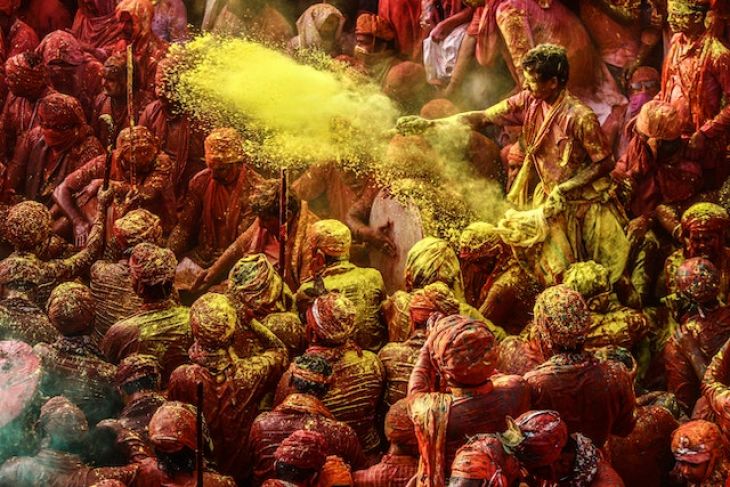 This auspicious festival takes place in mid-January and it marks the end of the winter solstice and the beginning of a new year for the Tharu people, an ethnic group in Nepal. During this time Nepali Hindus take baths in the holy river locations around Nepal and worship Lord Vishnu and organize Puja rituals. There is also singing and dancing and in countryside areas bamboo swings are built, not just for children but also for adults to play on.

Holi is the world-famous Hindu festival of colored powder which is full of joy and excitement. In Nepal Holi is also known as Fagu Purnima, and it is celebrated to welcome the spring season. Originally the powders thrown were natural ayurvedic herbs and flower extracts like neem and turmeric that were supposed to protect people from diseases during the changing of the seasons, although nowadays they are synthetic. If you are in Nepal during Holi, get ready to get soaked or dyed in color, and as the festival goes on for two days, there's no escaping!  In 2023 the festival will take place on the 8th of March.

Kartik Dance is a traditional dance and drama festival that happens during the months of October and November. This festival originally lasted 27 days, but now lasts 2. The dances are held in the seventeenth-century World Heritage Site Patan Palace. This festival started as a way to rid the area of Patan from bad spirits and it tells stories from the life of the god Vishnu.

What to pack and tips

What you need to visit Mexico
Next post
Be visa ready: all the information you need

How to travel in Nepal

What do you need to travel to Nepal?

What to See in Nepal

How to get a visa for Nepal

What do I need to know before going to Nepal?

How to get a visa for Nepal