What´s the best time of year to travel to Turkey?

Turkey is a country steeped in fascinating ancient history, with ruins surrounded by olive groves, snow-capped mountains, lush rivers and sandy beaches. It has some of the most delicious food and coffee in the world, as well as a rich cultural offering which will amaze travelers.

We want you to have the best time in Turkey and enjoy all the activities that this diverse country has to offer. Let us tell you about what you can expect depending on the time of year you visit. Hopefully this information will be useful for you to plan your trip!

Turkey has a very diverse topography from one end of the country to the other, so the climate will depend on the region you visit and what time of year you go. The coastal areas near the Aegean and Mediterranean Seas as well as Istanbul, have a warm and temperate Mediterranean climate and can get extremely hot in the summer. In winter the weather on the coast will be cool and wet. The warmest month in this area is July and has an average temperature of 23.5°C (74°F) and February is the coolest with an average temperature of 5.5°C (42°F).

In summer it is best to stick to coastal areas, as Istanbul and Cappadocia can get very hot but if beach time isn’t your thing, you can head to the Black Sea mountains where the temperatures will be cooler.

In winter Turkey cools down, and weather conditions can be very cold in the Anatolian mountains region, with temperatures down to −30 °C to −40 °C (−22 °F to −40 °F). However summers are hot with temperatures of 30 °C (86 °F) during the day and cooler at night.

Although there can be snow on the ground in the winter in regions such as Cappadocia or Anatolia, though very rarely in coastal areas. Make the most of the cold winter by getting your visa now so you don’t miss the ski season on Mount Erciyes in Cappadocia. 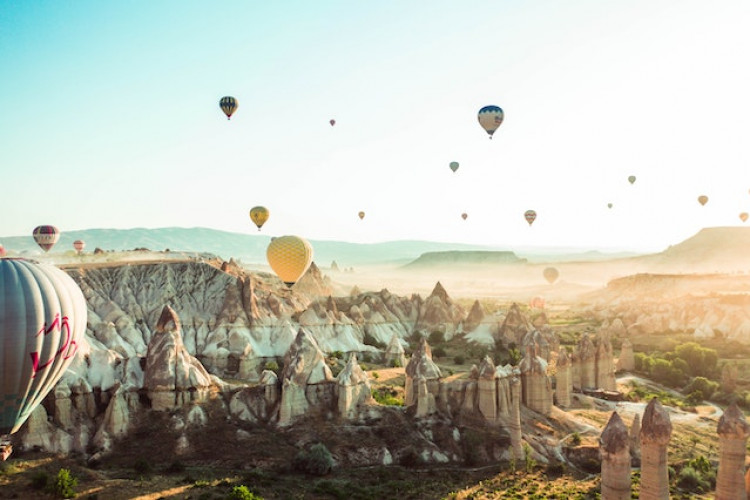 Turkey is a majority Muslim country, with 99% of the population registered as Muslim and 0,1% Christian. When you travel to Turkey you should bear in mind the most important Muslim holidays which are Ramazan Bayramı (Eid al-Fitr or Ramadan) and Kurban Bayramı (Eid al-Adha) which marks the end festivity of 30 days of fasting. These holidays are marked by the lunar calendar, so dates can vary slightly every year. In 2022 Ramadan was in April, in 2023 it will start on the 23rd of March. Locals tend to travel during these dates so prices may go up and many businesses may be closed or have reduced hours. During Ramadan look out for the evening meal iftar, which breaks the daily fast and is held after evening prayers. Some locals may invite you to join them.

Here are some local festivities and events you might want to check out:

On the third weekend of January, Selçuk, a town in the countryside near the ruins of Ephesus is home to a camel wrestling festival. This unusual display dates back thousands of years and was originated by nomads. During the festival two male camels wrestle over a female camel in heat. Although there are some concerns about animal welfare, the Turkish government has declared the festival part of historical culture.

If you want to indulge in a bit of pampering and hot steam during the Turkish winter, your first stop should be a Turkish Hamam. This ancient cleansing water and scrubbing ritual purifies the body and soul and is a key part of Turkish culture. Check out Cagaloglu Hamam or Hurrem Sultan Hamami in Istanbul.

This international jazz festival is held in Istanbul in July and attracts artists from all over the world. Make the most of your time in Istanbul (not Constantinople) and also visit the main sites of Topkapi Palace, Hagia Sophia, and Galata Tower among others.

Every December, the city of Konya hosts a mesmerizing whirling dervishes festival to commemorate the Islamic poet Sufi mystic, Rumi. The mystical Mevlevi Sema Ceremony is UNESCO listed and well worth seeing at least once in your life.

What to pack and tips

How to Travel in Turkey

Requirements to Travel to Turkey

Turkey visa for US Citizens

How to get the Turkey visa?

How to get the Turkey visa?

What's the best time of year to travel to Singapore?Tue 29 Nov 2022

How to travel in MexicoThu 10 Nov 2022
We use cookies to ensure you get the best experience on our website. If you continue browsing, you accept our cookies.Learn more